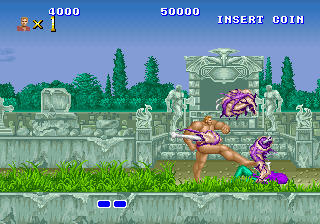 You are a hero raised from the dead by the god Zeus to rescue his daughter Athena. With scenery inspired by Ancient Greece, you have to fight hordes of undead and demons, with a boss at the end of each level until you meet the god Neff, who holds the girl captive.

The Altered Beast title refers to your shapeshifting abilities. In this platformer, you can collect spirit balls by defeating two-headed wolves, allowing you to mutate into different beasts such as a werewolf, a dragon, a tiger, a bear and others depending on the version. Each form, tied to a level, comes with special abilities such as flight and powerful attacks, easily superseding the basic set of punches and kicks in your human form.

The game can be played in single player mode, or in same-screen multiplayer co-op mode.

Like many games here on Internet Arcade, the controls are the arrow keys to move back and forth, space bar to jump, ALT to kick, and CTRL to punch.


Reviewer: jimmyjoebillybob - favoritefavorite - January 3, 2017
Subject: Can't play it!
tried all the keys and couldn't make it fight. I could move but not attack. What keys do I use? This game should have directions on which keys to use.
Reviewer: 80's Guy - favoritefavoritefavorite - November 2, 2014
Subject: A mediocre start to an excellent console generation
I remember the first time I saw this game in the arcade, on a widescreen monitor;
I watched others play (which is what a jobless 14 year old did back in those days) and was impressed by what I perceived to be an amazing play mechanic; as the level progressed, you would "power up" to eventually become a creature with super-powers, only to lose them at the end of the level to a creepy guy who said "welcome to your doom!" (digitized voice back then was still somewhat of a rarety.)

Fast-forward a few months, and the Sega Genesis was to be released (in limited markets- but thankfully mine), and the pack-in game was to be... an "arcade perfect" version of Altered Beast.

I begged/pleaded/finally got my parents to buy me the thing for the holidays, and nervously put the cartridge into the new console (and wondered why it was a cartridge, when the Genesis looked like a new-age CD player)
Turned it on, and was close to being blown away... For about 15 minutes.

Yes, longevity in arcade games is often an afterthought. Altered Beast was no exception.
The graphics were beyond what the NES and Sega Master System could do. The music, sound effects, and voices sounded great (especially via the headphone port on the Genesis). But the gameplay... It was fun for a few minutes, but then you wondered, "what next?"
Back in 1989, when the Sega Genesis games cost $69.99 (probably about twice that in 2014 dollars) "next" would be to play Altered Beast again... And probably one more time... and then go back to the Nintendo until another relative would buy you another game (and given the Genesis's early library, those games probably wouldn't last much longer.)

Beyond the nostalgia (and don't get me wrong, it's still a neat short game), it's a quick but fun beat-em-up. The play mechanic of "powering up" would later be advanced by the superior Golden Axe.
The level design became boring and incredibly repetitive, particularly after level 2.

It's a "neat" experience to get a sense of what these arcade machines were doing in the late 80's, but it wasn't a great game then, and it certainly doesn't hold up 25 years later.
It does give some insight, however, into the mindset of video game marketing execs back in that era- they expected (and were largely correct) that a 15 minute "almost arcade perfect" experience could sell a $200 console (again, think $400 today.)
This would certainly not fly even a few years later.